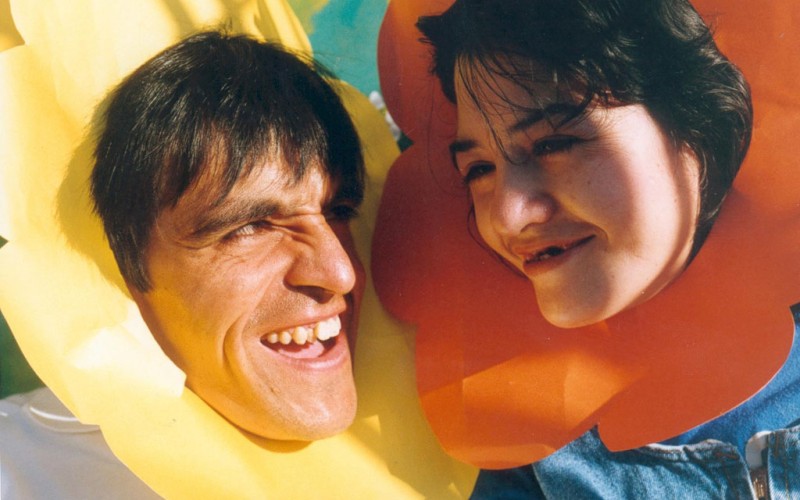 “The King of San Gregorio” is a story about a pure and simple love. The film talks about the life of Pedro Vargas – who plays himself – a 30 years-old man living in the slum of San Gregorio and presents a physical handicap and a certain grade of mental disability. Nevertheless, none of these factors will stop him from being the protagonist of this beautiful love story with his “princess” Cati, a girl who has a severe mental disability. As any other romantic drama, there are antagonists who do not approve this love. Pedro’s mother, María is hard to accept that her man-son is in love and she is even willing to prevent the relationship. Besides, the frustrated sister of the female protagonist, Marta, fears the sexual arouse of Cati, interfering in her relation with Pedro. Nevertheless, Pedro struggles for being with his princess, entrusting to God and to the wise advices of Juan, an old man who teaches him how to believe in love.

• Pedro Vargas - Chief Character
Known as “the King” in San Gregorio hood, Pedro Vargas is a 30 years-old man, who presents a certain grade of physical and mental handicap. Nevertheless, he is a very sensitive, romantic and optimistic person.
He strongly wishes to live the intense love he feels for his princess Cati, in a place beyond clouds.

Cati, the princess – (María José Parga)
She is Pedro’s sweetheart. She is a very beautiful green-eyed girl of a naïve aspect. She is 28, but looks younger since she is especially delicate.
She presents a severe handicap, because of a poliomyelitis she underwent when she was 3. Due to this illness, she nearly can’t speak and when she does, she uses very short words. She is always laughing and it seems she is always thinking about another thing.
The only thing she wants is to be with Pedro and when her sister forbids it, she cries and has violent attacks of nerves.
She has a kind of obsession with the Dorothy, the character of the “Wizard of Oz”

• María – (Gloria Münchmeyer)
Explosive and melancholic, María - Pedro´s mother and his main antagonist - is a 64 years -old widow who works as a domestic servant. Her strong black eyes are her most outstanding feature. She is very over-protective with Pedro, not only due to his handicap, but also because he is her only child. In this context, María emphatically objects his son´s relationship with Cati.

• Marta – (Giselle Demelchiore)
Marta is Cati´s sister and the second antagonist in the story. She is 34 and in spite of being very pretty, she looks neglected, dark and sad.
Due to the mother desertion, Marta takes care of her sister and it is the reason why she has postponed herself deciding to live alone with no boyfriend.
She fears for Cati´s relationship with Pedro and especially for her sister sex life.

• Juan – (Andrés Rillón)
He is Pedro’s mentor and he is the one who will help Pedro to achieve his goal of being with Cati.
He is 73, bald, with a neglected face and he moves in a noisy and old wheelchair.
He is hypochondriac and has an ironic sense of humor.