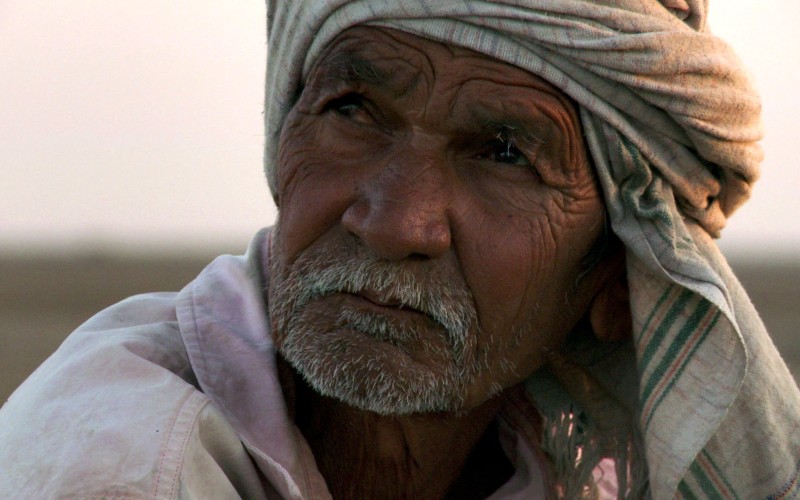 Year after year, for an endless eight months, thousands of families move to a desert in India to extract salt from the burning earth. Every monsoon their salt fields are washed away, as the desert turns into sea. And still they return, striving to make the whitest salt in the world.

The desert extends endlessly - flat, grey, relentless. There is not a tree or blade of grass or rock. But there is one thing in abundance: salt. Salt is everywhere, lying just beneath the cracked, baked surface of the earth. This is the Little Rann of Kutch, 5000 sq kms of saline desert. And for eight months of the year, the salt people live here - laboriously extracting salt from this desolate landscape. They have been doing this for generations.

Year after year, they migrate from their villages, 40,000 of them, to live on this bleak land without water, electricity or provisions. Arriving just after the monsoon, Sanabhai and his family will live here from September until April. Their nearest neighbour is a kilometre away. They communicate by flashing mirrors in the sunlight. Sanabhai’s wife Devuben walks across the bare, trackless desert to chop firewood. They buy the family’s water supply from a private tanker that comes once a week.

Sanabhai has taken a large loan from the salt merchant in town as an advance on his salt harvest. He needs money to dig a well to reach the saline water 70 feet below ground, and to buy the diesel for the pump which draws the brine into the salt pans. Over the next few months, the only sound to break the silence of the desert is the mechanical drone of the pump’s engine. It takes eight months for the brine to crystallise into salt. Knee-deep in the brine pond, under the blinding glare of the sun, Sanabhai and his family trample the ground to prevent the salt from congealing. Once the brine has evaporated enough to allow the salt to be handled, they gather it with heavy wooden rakes until large crystals have formed. Their labor is rhythmic, a dance that mirrors the dance of the mirages on the burning horizon. The white crystals are as sharp as glass. Only two of them have rubber boots. Several times in a day Sanabhai inspects the quality of the salt crystals and keeps a close watch on the level of water in the salt pans.

Two of Sanabhai’s children - a boy and a girl aged eleven and eight- go to a school recently opened by an NGO. Everyday at 11, after their morning’s work at the salt pans, they cycle off to school - just another hut in the vast emptiness of the desert, but with one difference: the children have planted paper flowers around it.

In April, the salt merchant sends his man to inspect the salt. No good, he says: the crystals are small, not white enough. He cuts the price agreed with Sanabhai at the beginning of the season. Sanabhai is downcast, but he shrugs his shoulders: what can you do? The next salt season will certainly be better.

Meanwhile, somewhere at the edge of the desert, mountains of salt lie next to the railway tracks waiting for transport to the city. The season is over and the monsoon is on its way: the heavy rains will soon wash the family’s salt fields away. The desert itself will not remain a desert anymore, but will turn into a sea. And the only way one can cross it is by boat.